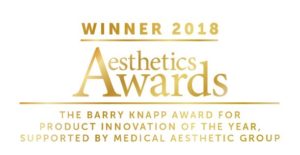 Each year this award is presented at the renowned Aesthetics Awards to products launched in the U.K. that represent genuine innovation or product advancement leading to treatment for new indications, quicker or easier treatments, better treatment outcomes, enhanced patient safety, backed up by sound evidence. The product scored extremely well with the judges, with one commenting, “An important innovation within the generic microneedling sector… I believe this product represents a benchmark for safety and quality in microneedling.”

“Bellus Medical, in partnership with BioActiveAesthetics, is honored to have received this prestigious award. SkinPen is a first in class technology that delivers safe and effective results,” said Joe Proctor, President of Bellus Medical. “We are thankful to Medical Aesthetics Group for recognizing our innovation in aesthetics. I was especially proud to have received the award with Jenn Block and Thomas Hitchcock, Ph.D. who worked together to finalize the development process. I would like to share a special thank you for Ashley Dynan who worked so hard to get the CE Mark in the UK. It’s a great win for the Crown family, and we are looking forward to continuing to innovate and improve technology in the field of Dermatology and Aesthetics.”

“After all the time, resources and effort that went into the development of Precision, it has been very satisfying to see how well the device has been accepted by the medical community. Additionally, to see it winning awards both in the United States and now internationally has been quite validating,” said Crown’s Chief Science Officer, Thomas Hitchcock, Ph.D. “We took a risk in redesigning the microneedling device from the ground up, and we are pleased to see that the innovation and thoughtful engineering that went into Precision is what our customers wanted in a next-generation microneedling device.”

Prev
Back to News
Next

The Aesthetics Awards, in association with Aesthetics Media Ltd, brings together the very best in medical aesthetics and leaders in the profession to celebrate the achievements of the past year. The prestigious ceremony recognizes those who have truly excelled in the field of medical aesthetics, from clinics and individual practitioners, to manufacturers and suppliers. The Awards create buzz, excitement, awareness and a chance to reward and recognize those who successfully contribute to the expanding and exciting specialty.

BioActiveAesthetics is an experienced and dynamic distribution company launching new and innovative products internationally using unrivalled expertise and core knowledge of the industry in the Professional Health, Beauty and Aesthetics Arena spanning 25 years.

The Managing Director – Kathy Taylor-Brewin has always had the ability to spot the next trend, whether it is equipment or product, Supporting, promoting or selling to the industry via a network of industry professionals built over many years.

The UK market is a small but mature and sophisticated market. BAA offers an understanding and passion of the industry from grass roots up, the key to their success is a real understanding of the professional Arena which can only be gained through experience.

BAA offers the drive and enthusiasm required with the ability to understand the end user’s needs providing the key attributes to make a success of new innovations that is required for unknown brands to develop and succeed in the medium to long term.

Bellus Medical, headquartered in Addison, TX, is an industry leader in medical aesthetics with an unmatched reputation of providing the highest levels of safe and effective products and the most innovative technology on the market. Founded in 2012, Bellus quickly became an industry pioneer with the introduction of its flagship product SkinPen®, a state-of-the-art microneedling device, which was the first ever FDA-cleared medical grade microneedling device on the market. Bellus’ product portfolio continually expands with unique and differentiated products developed to enhance the patient experience and represent a significant business opportunity for medical practices. Built upon three guiding principles – technology, education and customer service – Bellus is much more than a supplier to aesthetic practices, it is a trusted business partner.
Learn more about Bellus Medical:
Visit Website

Crown, a privately held, fully integrated global skincare company, is committed to developing and providing a diverse portfolio of aesthetic, premium and therapeutic skincare products that improve the quality of life for its consumers throughout their skincare journey. An innovative company focused on skin science for life, Crown’s unyielding pursuit of delivering therapeutic excellence and enhanced patient outcomes is why it has become a leader in Dermatology and Aesthetics. Crown has been listed on the Inc. 5000 Fastest Growing Privately Held Companies List for eight years and has expanded its distribution to over 38 countries. For more information, visit www.crownlaboratories.com.

These cookies are strictly necessary to provide you with services available through our websites and to use some of its features, such as access to secure areas.

These cookies are used to make advertising messages more relevant to you. They perform functions like preventing the same ad from continuously reappearing, ensuring that ads are properly displayed for advertisers, and in some cases selecting advertisements that are based on your interests.

These cookies collect information that is used either in aggregate form to help us understand how our websites are being used or how effective our marketing campaigns are, or to help us customize our websites for you.